Presented to sold out audiences  at the New York Open Center, Cathedral of St . John the Divine, Venice, Perc Fest and Salsomaggiore Italy.

The concert is inspired by two geographically distant but thematically parallel traditions. Southern Italian and Brazilian purification rites and procession performed in the summer o honor the archetypical sea goddess. In Brazil she comes from the West African Yoruba culture and is called Yemanja, in Italy she is called the Black Madonna of the Sea (once called Aphrodite). Alessandra Belloni plays a series of percussion instruments:

She is accompanied by a small ensemble of women percussionists, dressed in white and blue to honor the sea.

They recreate rituals with songs, chanting and dancing, drumming and offerings of flowers to the images of Yemanja and the Black Madonna. The music played will include fishermen's songs and love laments from Southern Italy and Brazil, as original songs written by Alessandra Belloni inspired by her trips to Hawaii and Brazil written in honor of Yemanja. This is unique passionate show  with great music and joyous ritual that invokes the healing power of primordial waters, was presented in Italy (Venice, Salsomaggiore Thermal resort, PERC FEST,  New York OPEN CENTER, Los Angeles Italian Culural Institute)  Trumpets Jazz Club 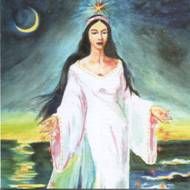 As the lights onstage went down, it was as if the crowd had been transported to a secret clearing somewhere in the Piemonte to witness some wonderfully obscure, mystical ritual. Alternating between high, eerie incantations and earthy folk melodies and playing a small museum’s worth of percussion instruments, they wove a sonic web not unlike another very popular vocal group, le Mystere des Voix Bulgares.

As head spell-caster, Belloni was so wrapped up in the music herself that she’d back off the microphone, eager to launch into the next song, even as she announced what it would be. In addition to melodies from various parts of Italy as well as Brazil and a couple of impressive solo turns from band members, their dancer whirled through the club, finally dragging a couple of audience members out on the floor as the drums and voices wailed high overhead. It was a performance that was as physically gripping as it was sonically captivating, even psychedelic.