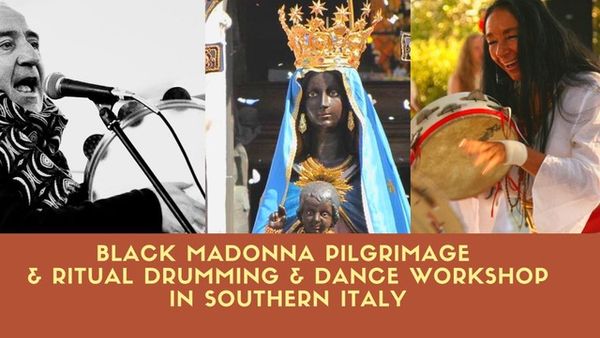 Join us this summer for a new pilgrimage dedicated to the drumming,

chanting, & dance traditions of the Black Madonna in Southern Italy!
Following Alessandra's Book, Healling Journeys with the Black Madonna  (Inner Traditions Bear and Co, 2019)
https://www.amazon.com/Healing-Journeys-Black-Madonna-Practices/dp/1591433428
This workshop will be a full immersion into the ancient drumming traditions and devotional chants in Honor of the Black Madonna, which can only be truly experienced in the sacred mountains and healing waters of the Mother Land. This powerful journey will introduce and transport students to a time and place where an unbroken and ancient tradition continues today with folk music, processions, devotional drumming, and dance.
Following Alessandra Belloni’s vision as part of the Black Madonna Center, this summer students will have the special opportunity to study and tour the area of Naples in the region of Campania.
Special Guest Nando Citarella from Naples!
We will be joined by internationally renowned Neapolitan Folk Musician, classical singer, percussionist teacher Nando Citarella. Alessandra’s long time collaborator and friend, he is one of the most important and well-known figures in the revival of Southern Italian Folk Music. Find more at www.NandoCitarella.it
We will also featured lectures about the goddess Isis and the Black Madonna by Egyptolgist, Archeologist, and GAIA Network host Armando Mei.
Alessandra Belloni is a native of Rome who has traveled the land extensively, researching and practicing the lore and traditions of The Black Madonna. She will take you inside the heart of this land, sharing her knowledge, and giving you an authentic, local experience.
For information and registration email  -
Alessandra Belloni ABelloni@aol.com  and must always copy
For logistic Fabiana Eramo fabtraveller@hotmail.com,
For questions about travel Silvana travel silvana.re@vwti.com,
Workshop and Pilgrimage Dates:
Summer 2023 Dates TBA! Below is the itinerary from our 2022 voyage. 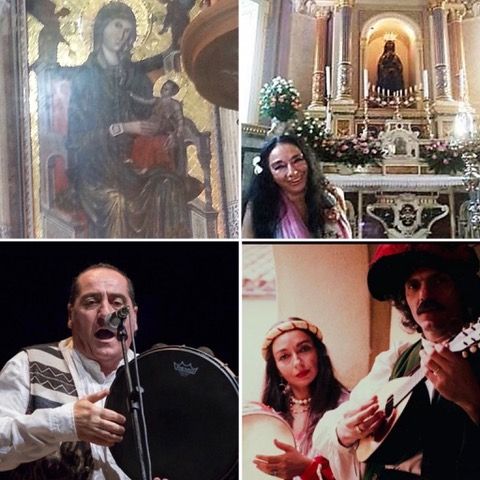 PAST 2022 ITINERARY
August 1- 2nd: Workshop & VISIT TO THE BLACK MADONNA DELL’AVVOCATA
During these workshops on the stunning Amalfi Coast, students will study the basic Italian tambourine and frame drumming techniques of the Tammorriata 4/4 rhythm in honor of the Black Madonna. These powerful workshops will include the special collaboration with folk musician, percussionist, and Neapolitan singer Nando Citarella, who will guide students in learning traditional drumming, chanting, and dance.
Alessandra and Nando will introduce the ancient style of rhythm and dance known as the Tammurriata, which dates back to the rites of the Mother Earth Goddess Cybele – protector also all of gay and transgender people – and the Egyptian Goddess Isis, both of whom are now worshiped as the Black Madonna all over the South of Italy. Alessandra and Nando will also lead participatory chants of devotion to the Sun (Jesce Sole), an ancient healing chant using the Lydian Scale or Neapolitan Scale, as well as authentic chants and prayers.
These workshops will take place during the days and some evenings in improvisational Neapolitan style.
August 3th: VISIT TO LA MADONNA DI POSITANO
Positano is the most beautiful town in the Amalfi Coast. It is also where the Goddess Aphrodite was worshipped in ancient times.
AUGUST 4th: Free time and special evening workshop with Nando Citarelli featuring incredible food and stunning music
August 5th:  Isis and the Black  Madonna in region of Campania
In the morning we’ll attend a lecture by leading scholar and Egyptologist Armando Mei on the Egyptian settlements in Campania and their esoteric influences on Naples.
In the afternoon we’ll travel to Torre Annunziata near Pompeii, where we’ll witness the unique re-enactment of the discovery and fishing of the Black Madonna della Neve, who originally found in a large cage in the sea in the year 1350. This feast is held at sunset by sea near Vesuvius, with boats following the Madonna in procession along the coast to blessing the water and the town. This is an ancient ceremony with origins in the worship of the Goddess Aphrodite and the African Orisha Yemanja, Goddess of Love and the Sea.
August 6th: VISIT TO THE BLACK MADONNA OF MONTEVERGINE
In the mountainous region of Irpinia we will visit the Black Madonna of Montevergine. Known as MAMMA SCHIAVONA, she is considered the most important of the Seven Sisters, and is worshipped in the ancient sacred site of the Earth Goddess Cybele. She continues to be venerated on a high sacred mountain, which pilgrims still climb barefoot today chanting and drumming in her honor. Here we will drum and chant with Nando and Alessandra, as well as learn about the cult of the femminelli – transgender and third gender people who still venerate the Black Madonna today.
August 7th: VISIT TO THE MADONNA DELLA LIBERA - MOIANO
Will end our journey near Benevento where we will visit LA MADONNA DELLA LIBERA – Our Lady of Freedom. This is a beautiful and powerful statue which has direct origins to the Egyptian Goddess Isis, the FIRST BLACK MADONNA AND CHILD.  Alessandra will lead special chants and participants will have the opportunity to play and sing in honor of the Black Madonna.
AUGUST 8  - CHECK OUT FROM HOTEL & departure from Naples 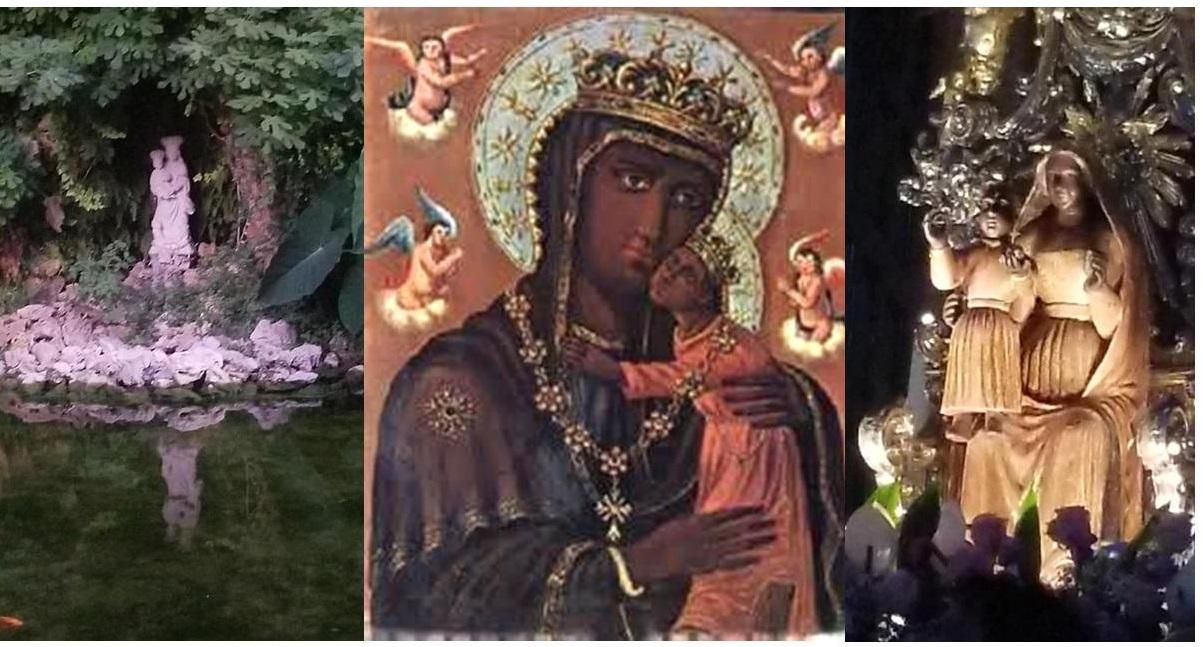 Join us to share food, drink and wonderful music while we celebrate four decades of I Giullari Di Piazza and Alessandra's Belloni's work! During this holiday end-of-year fundraiser, we will also honor Emmy Award Winning Actor Armand Assante and International Model and Ambassador of Made in Italy Eleonora Pieroni.
There will be a performance featuring the South Italian Tarantella healing trance dances and ritual drumming chants and dance for the Black Madonna. Don't miss this opportunity to be together again, in person, for the first time since 2019!
This will be such a special celebration of over four decades of work for I Giullari di Piazza who are artists in residence at the Cathedral of St. John Divine and who have also performed at Carnegie Hall, Lincoln Center and Symphony Space, to name but a few.
You will have the opportunity to listen to Alessandra Belloni, author of the book "Healing Journeys with the Black Madonna", published by Inner Traditions-Bear & Company. The concert will feature:
Alessandra Belloni - Artistic Director, Percussions and Vocals
John La Barbera - Music Director, Composer, Guitar, Mandolin, Chitarra Battente
Wilson Montuori - Guitar
Mara Gerety - Violin
Steve Gorn - Bansuri Flutes, Saxophones, Clarinet
Dancers - Francesca Silvano, Peter De Geronimo, Greta Campo
Mark Mindek - Stilt Dancer 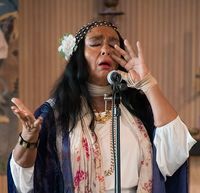 I am very proud to be part of a great line up of singers as part of the 10 week Songs of Mother Europe series directed by Hanna Leigh.

On November 3rd, I will be teaching a special Southern Italian Folk Songs workshop that includes the healing women work chant from Puglia and the healing chant to the Sun from Naples.
For details and to register for the 10 week series, please click here or the ticket link below:
https://alessandrabelloni--hannaleigh.thrivecart.com/songs-of-mother-europe/
This Songs of Mother Europe series is intended to connect you more deeply with your ancestral remembrance - in visceral ways - through learning the old methods of singing. We know that song has the power to awaken ancient memory.

​My prayer is that this series will do just that.

⇻ A moderated community sharing forum (not on FB) 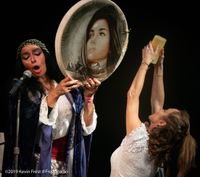 We’ll learn the traditional ancient healing trance dance of the tarantella used to cure the mythical bite of the tarantula, in use for centuries throughout the Mediterranean as music and dance therapy. We’ll create a community healing ritual as our bodies move in ways that help us to open the energy points and stay grounded. According to what Alessandra observed in her practice and personal experience in teaching healing workshops around the world, “tarantismo” may be defined as depression or sadness caused by unrequited love or abuse. In modern day music therapy the tarantella rhythm targets especially women.

We will also learn a unique style of traditional Southern Italian frame drum & tambourine playing, including variations of the 4/4 rhythm of the Tammorriata.These rhythms and movements represent an unbroken chain of inspiration and expression of sound and dance, dating back to the rites of the Mother Earth Goddess Cybele, and kept alive into the present. We will learn the history of this powerful tambourine style, traditionally done by women. Empowering women to get in touch with their ancient frame drumming traditions, achieve inner balance and relief of stress while restoring spiritual and physical energy is a major theme of this work.

Tambourine and frame drum - Put into practice with frame drum technique. Alessandra as facilitator embraces the Tammorriata- 4/4 rhythm in honor of the Black Madonna with African origins– making a circle of frame drum players. The focus is to give the participants a practical tool to use in their practices, using small percussion instruments such as tambourines together with movement and exercises for grounding and opening the heart chakra.

For more information:https://alessandrabelloni.com/tarantella-the-black-madonna-drumming-and-dance-workshop
Cost $70
Payment Venmo (at the link below) Zelle (abelloni@aol.com) or through this link: https://www.everbutton.com/pay/6349