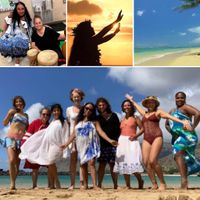 RHYTHM IS THE CURE Healing Dance and Percussion Workshop from Southern Italy & Hula from Hawaii!

Drumming classes will be held on the beach every morning!

NEW THIS YEAR: SPECIAL FEATURE HULA CLASSES with Auntie Nettie Armitage Lapilio On the tradition of PELE Hawaiin Goddess of the Earth She is a fully recognized Kumu Hula and Hawaiian Cultural Practitioner. She has been teaching Hula, Hawaiian Language and Music for 48 years. She is a practitioner of Ho’oponopono, a Traditional Hawaiian practice for healing both family and professional relationships. She is a highly sought-after professional musician and educator in Hawaiian circles.

Also featuring special guest Father Phil Harmon, founder of Kahumana Farm, a theologian who specializes in the Divine Feminine and the Black Madonna and will hold classes in the evening in the Black Madonna Chapel of the Steiner center.

Special prices at : $750 for the workshops, plus accommodations and food see below: A 25% deposit is required ASAP to hold the room at the retreat center Double $ 360 including cleaning fees deposit required 25% - special food fresh organic catering provided by Davina $40 per day for 3 meals

Join us for a week you will always remember. Register today! DURING THE RHYTHM IS THE CURE WORKSHOP Participants will learn:

The unique style of tambourine playing and the ancient healing trance dance of the tarantella, used to cure the mythical bite of the tarantula. Alessandra will also teach sacred chants of the Black Madonna from Southern Italy and other parts of the world. Drumming classes will be done on the beach every morning!

Objectives of the workshop are:

--To learn the history of this powerful tambourine style, originally done mainly by women, which dates back to the rites of the Mother Earth Goddess Cybele, now worshiped as the Black Madonna and to come to understand the healing and stress-relieving effect of these rhythms and dances.

--To bring women back in touch with their lost drumming tradition.

--To make the participants feel part of community-healing ritual

TAMMORRIATA – A powerful rhythm set to an African beat played in 4/4 time in honor of the black Madonna, originally ancient rites for the Earth Goddess Cybele. It accompanies a sensual dance from Naples danced with castanets to the rhythm of the large drum, called Tammorra.

RITMO E DANZA DI SAN ROCCO (SPINNING DANCE) – This dance, originating in Calabria during the Middle Ages. It was danced during the time of the plague to help people release the overpowering fear of death. Due to the trance-inducing movements and incessant spinning, many people enter ecstatic states during this dance, similar to the Whirling Dervish ceremonies.

THE PIZZICA TARANTATA – The wild 6/8 rhythm of the Pizzica, played on medium size tambourines and accompanied by dance and song, was performed as an exorcism ritual that produced a trance-like state beneficial for healing many mental-health disorders and imbalances. As part of a re-enactment of this healing ritual, participants will play a circle and learn the ceremony : a dance where they’ll create “spider-like” movements on the ground, releasing stress and blockages of energy.

Alessandra ends the sessions using the ocean drum, creating the sound of waves in a final relaxation invoking the healing power of the water with chants to the Goddess of the Sea, the Sun and the Black Madonna. Participants are encouraged to wear white and red, and women to wear skirts. Father Phil’s Course Description:
An orientation to the teachings and practices of the Western Esoteric traditions, the Mystics, and the Saints, presented by Archpriest Philip, on the Black Madonna as the Earth-Mother in a Feminine Divine Trinity, with the Holy Sophia, her Celestial-Daughter, and with the Sacred Soul (Holy Spirit) and our Angelic Companions as the Being who unites the Earth and the Heavens.

ABOUT THE LOCATION: Windward Retreat Center The center is a place Friends and family from around the world can come together to learn, experience, and grow, in an environment of awe-inspiring beauty and tranquility. The Windward Retreat Center was designed for educators and non-profit groups looking for a special space to hold retreats, workshops, and meetings. The main meeting room is ideal for yoga, Qigong, or other open spaced events. It also can be configured for conference, classroom, or lounging. SIGHT & SOUNDS: Integrated sound and video systems were designed to bring multimedia presentations alive. High speed internet and wi-fi keep guests connected. ACCOMMODATIONSAll overnight guests will be treated to wonderful nights sleep. All beds are the finest quality hotel beds that are triple sheeted for a five-star nights sleep. The Windward Retreat Center is a nonprofit organized in a manner consistent with the traditions, testimonies, faith and practice of the Religious Society of Friends (the Quakers).

In "Drums of Illumination" Alessandra Belloni unites two great cultures: the powerful Native American, and the passionate Southern Italian, for a journey back in time into a world of ritual drumming, voice and trance dances. 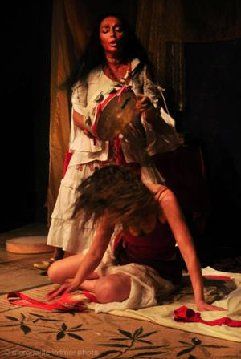 from reviews of "Drums of Illumination")

"Alessandra Belloni, before each song, outlined the tradition in each culture. Her intense love of each form supported the entire event. And what could be more appropriate for an evening of connection and community than to end with an invitation to the audience to dance?...... We all linked hands and made our way to the stage to share in joyous movement and music."

Internationally renowned singer/dancer/percussionist Alessandra Belloni and I Giullari di Piazza present "Drums of Illumination," a program of ritual drumming, trance dances, and chants representing two great cultural traditions: Southern Italian and Native American,  Belloni and I Giullari will be joined by the SilverCloud Native American Singers and Dancers, completing a remarkable group of percussionists, vocalists and dancers, all specializing in healing and ritual music and dance.
The happy and successful relationship between Belloni and I Giullari and Muriel and Kevin Tarrant goes back to 1992, when they worked together in the I Giullari production of "Earth, Sun and Moon," a spectacular show that was commissioned by Lincoln Center and received both critical and audience acclaim.

Artistic Director Alessandra Belloni notes that one of the purposes of "Drums of Illumination" is "to bring in to LIGHT  the similarity between the two ancient traditions in Southern Italy and  Native Amrerican cultures, invoking World Peace by showing that we are all one, adding that "the pow wow drum, the Italian tambourine, and the drum set - all will send good vibrations into the air as a collective ritual of purification."

The evening will feature Tarantellas from Southern Italy, including the authentic Pizzica Tarantata; healing trance dance from Puglia used to cure the bite of the tarantula (the myth that dates back to the ancient Greek rites of Dyonisus), healing chants and drumming in honor of the Black Madonna and the Goddess of Love and the Sea; Native American ritual singing and drumming, love songs, warrior dances, the amazing Indian hoop dance, by Josephine Tarrant.

Outfitted with an extensive complement of exotic percussion instruments, and both Remo Artists, tambourine virtuoso Alessandra Belloni and drummer Sergio Bellotti (drum teacher at Berklee School of Music in Boston), both from Southern Italy, have enjoyed a long collaboration celebrating and exploring the rhythmic similarities between Southern Italian and other cultures by blending various percussion instruments. With music both ancient and new, Belloni and Bellotti create a bridge between ancient rituals and modern rhythms into a vibrant musical tapestry.

Murielle Borst, Artistic Director of The SilverCloud Singers and Dancers, also distinguished herself in her one-woman show "More Than Feathers and Beads," which was nominated for a Rockefeller grant and selected to participate in the Global Indigenous Theater Festival in Sydney Australia, as well as several venues in NYC.   She has completed six books in her fantasy series, "The Star Song Carriers."   Borst and Belloni, "soul sisters" who share the same energy and spiritual beliefs, first collaborated in 1992 on I Giullari di Piazza's "Earth, Sun and Moon," commissioned by Lincoln Center and performed for years in NYC and on tour.

The SilverCloud Singers and Dancers is an intertribal Native American troup weaving  the traditional with the contemporary Native American song and dance.   Founded in 1991, the company is named in tribute to Josephine Mofsie Tarrant, mother of the founding directors.   The singers come from many tribes, and many parts of the U.S. and Canada.   They have appeared in numerous Pow-Wows across the continent as well as in tours to Europe.